As a homeowner, there are many decisions that you have to make. It is essential to know the type of thermostat bar mixer shower that you want to install in your bathroom. When making such a decision, you will have an array of options. With bar mixer showers, you have the old manual dial style turning until you get the right temperature for you.

The modern ones were hot and cold are combined and regulated at the degree best for you. They have many benefits, including constant pressure and temperature. With this article, you will get the required information to make a great decision on the best thermostatic bar mixer shower for you.

Which Is the Best Thermostatic Bar Mixer Shower on the Market? 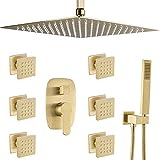 How to Choose the Best Thermostatic Bar Mixer Showers?

Your morning shower can break or make your money; with this in mind, you have to invest in a reliable thermostatic shower, which will get you on a good start. There is nothing worse than a shower that does not know whether it wants to be cold or warm. A shower that changes between freezing and scalding can be very annoying and even injuring. Getting consistent temperature water is excellent, mainly if kids use that shower too.

Thermostat showers are an excellent option because they are built with features that ensure safety; they include constant temperature even when someone runs the tap or flushes the loo. Below is how to choose the best thermostatic showers for you and your family.

When it comes to the shower design, it is really about personal preference because there are so many options. If kids are going to use this shower, it’s essential to find one that is adjustable. That is important because you get an adjustable height. There are traditional options and ones with a sleek modern look. Thermostatic showers with chrome finishes are well-known in the market as they are stylish and straightforward.

Ensuring you buy an energy-efficient shower will be great for your budget. It cuts down on costs because it limits the amount of water used, which means you will not get large water bills at the end of the month. That is because it cuts down on the usage of water up to 50 %. Therefore when choosing the best thermostatic shower, buy one that is energy efficient.

One of the critical things to look at when choosing an excellent thermostatic shower is its ability to control the temperature. A good thermostatic shower will have a constant temperature even when someone is running the tap upstairs. Also, choose one with a safety button that will instantly take you back to the previous settings. Such showers are great for older adults and kids and are very easy to use.

When choosing a thermostatic valve, ask about the installation process. Some showers can be very complicated to install and may need extra costs for it to start working. While others prefer cheap thermostatic showers, they may not have all the features you need. Find out the features they offer and then check with your budget.

The best thermostatic showers come with long warrants. Warranties that last for years give you peace of mind, even though buying one that does not rust may seem like a good idea, extra assurance just in case is excellent. All reliable brands have outstanding warrants.

Planning to get your dream shower installed is more than just knowing the color, style, finish, and features. One of the critical decisions that you have to make is whether you want a thermostatic bar shower or a non-thermostatic bar shower. Many users are not about the differences between the two; we are going to look at what sets the two apart.

The non-thermostatic bar shower is an upgrade from the two-handle shower valves. The two handle shower valves, though outdated, could produce water to a temperature of up to 140 Fahrenheit, which was more than the approved percentage and was known to cause injuries. Even when you had adjusted the temperature, there was no control valve to ensure that it remains so throughout, that always caused scalding.

The non-thermostatic bar showers are pressure-balancing valves that have done away with such types of showers. You can install them to be adjustable in a way that it won’t produce scalding water. They also have a pressure balancing mechanism that means it is safer than previous models and more comfortable. 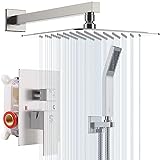 Thermostatic showers give their users peace of mind when it comes to the temperature of the bath. The shower continually makes adjustments to water pressure just in case anything changes. They ensure you get a constant flow of water pressure and an even shower temperature.

Also, thermostatic showers ensure you get a continuous flow of water through the air injection technology. Those considering multiple options for spraying, then this is the best option for you. Just turn on the tap, and you will get the temp you want.

After selecting the temperature you want for a shower, a thermostatic bar mixer shower ensures that it remains constant. When next you come back to shower, you don’t have to regulate again because there is a safety button you can press that will take you back to your previous settings. 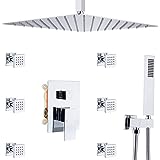 Thermostatic bar mixer showers are designed to reach the selected temperature consistently and quickly. That means there is no water wastage because of the fast reaction time. They also have an ECO stop button that limits the consumption flow. Its constant water temperature saves energy as it does not keep changing. 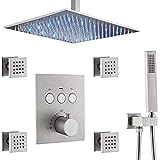 Bathroom safety is vital, al mainly if kids and the elderly use that shower. Thermostatic showers have an ECO stop button that ensures water does not go above 38 degrees. That ensures that no one gets burned, in case there is a problem with cold water, and it automatically shuts off to avoid scalding. The temperature that you will select will continuously run throughout the showering experience.

What Is A Thermostatic Bar Mixer Shower? 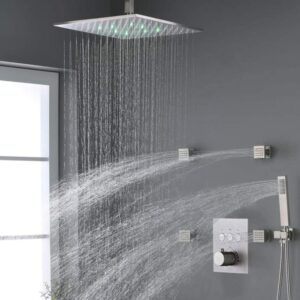 A thermostatic bar mixer shower is a type of shower stall that maintains the exact pressure and temperature throughout your bath. That means that when someone flushes the toilet upstairs or downstairs, your water temperature will not change. They come with a thermostatic valve that mixes the cold and hot water to the required temperature, usually about 40 degrees Celsius.

If there is any change in pressure or temperature, this bar mixer shower type reacts immediately and adjusts it so that they will remain constant. If the cold water fails, the thermostatic shower switches off so that you do not get any type of scalding. The thermostatic bar mixer shower comes with a safety button where you can press and go back to the previously set temperatures.

How Does a Thermostatic Bar Mixer Shower Work?

The valve ensures cold and hot water is mixed together before leaving the showerhead. The hot and cold water mix inside the valve to attain a pre-set temperature. In case of changes to the water temperature, the valve reacts instantly to adjust the mixed water and restore it to the pre-set temperature. Some of the best thermostatic bar mixer showers shut off automatically if either the hot or cold water flows reduce, protecting you from scalding heat or cold bursts.

The bar mixer valve has several elements that enable it to constantly monitor the temperature of the water and maintain it at a consistent level, including:

This element is sensitive to water temperature, expanding or contracting in response to the water moving through it.

It attaches to the thermostatic element. When the heat increases, the element increases in size. The piston moves across the cold and hot water entry portals to increase the quantity of cold water while reducing the hot water.

When the thermostatic element reduces in size due to loss of heat, this spring moves the piston back across the cold and hot water entry portals to reduce the volume of cold water while increasing the quantity of hot water.

This control is usually in the form of a dial or a lever. It lets you reduce or increase the water temperature. As you adjust it, it moves the piston manually to change the proportions that the cold and hot water flows mix.

How to Install a Thermostatic Mixer Shower?

After buying the best thermostatic bar mixer shower for your needs, you’ll need to install it. The tools you’ll need include:

Here’s a primer on how to fit the shower:

Decide where you’ll take the cold and hot water supplies.

Isolate those water supplies by switching off the stopcock and then opening the cold and hot water taps to drain the pipes.

Hold the thermostatic valve next to the outlet pipes flat against the shower wall. Use a pencil to mark the length of the pipes that will allow the valve to be installed flush against the wall.

Mark the holes where the screw points and the valve will fit into, and then drill them.

Align the thermostatic valve with the cold and hot pipes. Once it fully slides into the pipes, screw it into the wall and tighten the nuts.

After fitting the valve, you can install the rest of the shower. If installing a flexible shower hose, you’ll only need to connect the hose to the valve by screwing it in and fitting in the bracket that will hold the handset. A riser pipe may come oversized, meaning you may have to cut it down to appropriate size with a pipe cutter before installing it.

After fitting the rest of the shower, turn on the water to check for leaks.

As you have noted, thermostatic bar mixer showers are great showers to use at home. They look charming and elegant and match with all types of bathrooms, but they are also compatible with most shower settings. With these types of showers, you can never go wrong. Get yourself and the whole family a thermostatic bar mixer shower and have a great showering experience for years.