How To Use Two In One Shower Head?

If its time to replace your shower head you might want to consider upgrading. A two in one shower head is a dual purpose attachment. It works as a standard showerhead as well as a hand shower head. It’s a versatile type that can give you a spa-like experience. It is a luxury bath accessory that can make bathing faster, easier, and more enjoyable. If you haven’t used one yet, this guide will explain how to use a two in one shower head.

How to Use a Two in One Shower Head?

A two in one shower head is a unit that features two separate heads. One stays attached to the wall pipe and the other is mounted off to the side. The second head is detachable. There are different brands and models and each may work a little differently, but most of them are easy to use. Most of them have a dial or knob at the top of the main head that lets you switch the water over from one head to the other. This directs the flow of water to the right head so you have full water pressure. 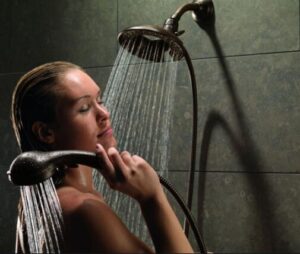 Before using two in one shower head, you should figure out the benefits of it.

1. Benefits of a Two in One Shower Head

A two in one shower head gives you a lot of great advantages over the regular single heads. Here are the reasons why we recommend this type and who they are best for.

-A two in one shower head is easier to use

If you suffer from mobility issues a two in one shower head can make it easier to bathe. You can use it while sitting in the bathtub instead of standing. This makes it a great choice for anyone with mobility issues including:

-A two in one shower head is convenient

When you don’t have time to take a full shower, you can wash your hair fast with a two in one shower head. Simply direct the water flow to the secondary head, lean over the tub, and use the detachable shower head to wash and rinse your hair. This makes the task faster and easier than taking a full shower. You don’t even need to get undressed.

-It is a luxury appliance

-It reaches hard to get to spots

When showering, there are a few places in the body that can be hard to reach. This is especially true if you have injuries or health issues. The detachable head can be manipulated to reach all of these spots. You can wash away all of the soap residues that will make your skin dry and itchy if it’s left there.

2. How to Apply Two in One Shower Heads

-Turn on the water

The first step is to turn on the water and direct it to the showerhead at the main faucet just the way that you’ve done before installing the new two in one shower head. Adjust the temperature to make sure it’s not too hot or cold.

There will be a knob or dial at the top of the larger shower head that is attached to the wall. You can either allow the water to fall from the main head or turn the knob to switch it to the secondary head. It is mounted to the side of the larger head for most models. Some two in one shower heads can be adjusted to use at the same time.

The handheld showerhead is removable. You can either adjust the water flow pattern before you take it out of the holder or do this after you remove it.

If your two in one shower head come with special features, like fine, medium, and heavy spray, there will be a knob or lever to operate it. This can give you just the right amount of water to remove all of the soap from your body and the shampoo from your hair.

How to Operate Delta Two in One Shower Head?

The Delta In2ition two in one shower head is a model that lets you run the showerheads at the same time or separately. The primary head remains attached to the plumbing. The secondary head detaches for flexibility.

What is the Pause Function?

The Delta In2ition showerhead is made with a special pause function. This feature is installed on the hand shower head. It slows the flow of water down to a trickle. This lets you save on water consumption when you’re doing other things. It comes in handy when you’re shaving your legs, or lathering up.

How Do You Dock and Undock the Hand Shower Head?

Delta has made the In2ition shower head to be easy to use. When you want to use the handheld, simply pull the integrated shower head from the big shower head. It is located in the center of the larger head for convenience. You can pull it out with ease and the flexible hose allows you to reach almost any angle so you can stream water to hard to reach places.

How to Use All of the Options

There are three options available for using your Delta In2ition two in one shower head. They are:

There is a diverter lever that is placed on the side of the main showerhead. Use this lever to divert the water in any way you want. It’s as easy as positioning the diverter lever to the position of the option you want to use.

How to Install Peerless Two in One Shower Head?

Installing a Peerless brand two in one shower head is not difficult. It is a 5 step process that can be completed in less than 20 minutes if you’re experienced, and just a little longer if this is your first time completing the process. Here are the steps involved to achieve a perfect leak-free installation so you can start using your two in one shower head.

Preparation before you start:

It’s wise to turn off the water that goes to your shower before you begin. This eliminates the chance of anything going wrong such as a full flow of water while you’re changing the showerhead.

Gather the tools that you need. An adjustable wrench or a pair of wide jawed pliers will work.

You’ll use a pair of pliers or an adjustable wrench to remove the old showerhead.

-Only turn the showerhead. Make sure that the shower arm that the head is attached to does not turn. You may need to hold the shower arm securely in place to ensure that it doesn’t turn and unscrew from the plumbing.

-Inspect the shower arm. If there is a ball on the end of the arm, you will need to replace this part with a standard shower arm so the Peerless shower system two in one head will work with it. If this is the case, proceed to the next part of step one. If not, skip the next phase.

-Unscrew the shower arm from the plumbing/piping by turning it counterclockwise with the pliers/wrench.

-Remove the flange. The flange is the round disk that covers the hole in the wall that makes it look clean and finished

-Inspect the hole and do any cleaning that is needed. You can use a damp rag to reach into the hole and remove any debris that has been collected. Also, clean the pipe to remove any rust. You can use baking soda paste made of soda and a little water. Clean thoroughly and then dry the pipe with a soft clean rag.

-Wrap all of the threaded areas of the pipe coming from the wall with a layer of plumbing tape. This seals the connecting threads with a waterproof layer that prevents leaking. You’ll need between three and five layers of plumbing tape.

-Wrap plumbers tape to the other end of the new shower arm pipe where you will connect the showerhead. Use between 3 to 5 layers/wraps.

Turn the new shower arm pipe clockwise. Use the wrench/pliers to make sure that you get a tight fit

Place the flange ring over the shower arm pipe. You can screw it in by hand but make sure that it fits tightly and that it is secure against the shower wall. You’re ready to resume the installation of your new Peerless two in one shower head.

Now it’s time to connect the hose that comes with your Peerless two in one shower system. Start by connecting the hose to the hand shower head. First, seat the washer and make sure that it sits firmly into the tapered nut of the hose.

Align the threads of the hose nut with the hand shower threads. Screw into place but do the tightening by hand. You shouldn’t use a wrench or pliers for this. Now place the hand shower into the shower mount.

-Examine the shower mount and look for a washer. It’s important that the washer is present to prevent leaking.

-Hand turns the female nut of the diverter/shower mount in a clockwise direction as you connect it onto the shower arm threads. —Hand turn it until it is tight. You can use a wrench or pliers to tighten the diverter nut, but it’s important not to over tighten it.

Step 3: Install the Peerless two in one shower head

-Inspect the showerhead and make sure the washer is there.

-Seat the washer into the shower head’s female end and make sure it is set firmly.

-Screw the female end of the showerhead onto the diverter/shower mount threads. Hand tightens turning in a clockwise direction. Do this step by hand and avoid using a wrench or pliers. Make sure it is hand tight.

Step 4: Connect the hose to the diverter/shower mount

-First, seat the washer into the hose hex nut and make sure it is firmly in place

-Align the hose nut threads directly to the diverter/shower mount

-Tighten the hex nut by hand, turning clockwise, to the diverter/shower mount’s bottom outlet. The hex nut tapered nut washer is used to adjust the spray setting for the hand shower.

Step 5: Connect the Hose to the Hand Shower

-Seat the washer into the tapered nut of the hose firmly.

-Alight the threads of the nut of the hose to the hand shower.

-Set the hand shower into the shower mount. This is the final step. You are now ready to use your Peerless two in one shower head.

-Turn on the water.

A two in one shower head is convenient and easy to use. There are multiple benefits if you have mobility issues. Even if you have no limitations, this luxury head type is fun to use and it can make showering more enjoyable. The installation process is not difficult if you take your time and complete each step as directed.